Diana Marlene “Billie” Pettit, 73, passed away January 7, 2019, in Rainier, Washington, where she was born
February 24, 1945, to Harry A. and Emma Louise (Prince) Koeppen.  A Rainier resident for 56 years, she
obtained her GED from Rainier High School after attending Yelm schools.  Billie married Leroy A. Pettit on
June 30, 1962, in Tenino, Washington. She enjoyed being a wife, mother, homemaker, grandmother, and
great grandmother.
Billie was a hardworking woman with an outstanding work ethic.  She began working on a chicken farm when
she was a teenager. She later worked on a mink farm, and at Foxfire Farm where she cleaned stalls and was QC/seamstress.  She also worked at Rainier Feed Store through three changes in ownership.
Billie was involved with animal rescue, including horses, mules, cows, cats, dogs, chickens, pigeons, pigs and
rabbits.  She enjoyed gardening, sewing, doing puzzles, reading, berry and fir cone picking, four wheeling, barrel
racing, gaming, and showing horses.  She was a sports mom to all three kids through school and made costumes
for parades. She was also a handywoman who did woodworking, drywall, painting, and tile work.
Billie was a strong, opinionated woman who would do anything for her family.  She would take on any battle.  She
loved country music and enjoyed debating a good argument.
She was a member of the Rainier Sportsmen’s Club, Rainier Booster Club, Thurston County Election Board, and Rainbow.  She also was a girls’ softball coach, 4-H leader, Rainier M/C concession stand coordinator, school
volunteer, Lions volunteer, and singles and doubles bowling leagues.
Billie is survived by her son, Leroy A. “J.R.” Pettit of Rainer; daughters, Lisa A. Pettit of Bucoda, and Darcy A.
(Ross) Hansen of Tenino; grandchildren, Damian L. Green of Olympia, Washington, Katy Pettit of Chehalis,
Washington, and Taylor Hansen of Tenino; great-grandchildren, Ben and Wyatt Pettit; brother, Bud Koeppen,
and wife, Sandy, of Mesa, Arizona. She is predeceased by her husband, Leroy Pettit (December 2, 2018); and
parents.
A celebration of life for both Billie and Leroy is being planned for a later date. Memorial donations may be made
to the American Cancer Society.

Upload Your Memory View All Memories
Be the first to upload a memory!

A "Celebration of Life...for both Billie and Leroy" will be held at a later date.

Posted by Linda Johnson at 4:33 PM No comments: 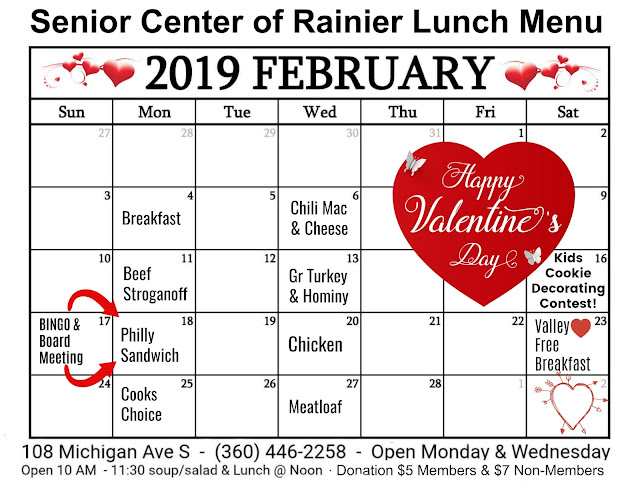 Posted by Linda Johnson at 6:17 PM No comments:

What an amazing couple of days!  Donna and Cindy, who work in our kitchen, came in to help cook and serve breakfast for the people who showed up at the Senior Center for the STEDI Meeting Friday.  We started cooking at 6 AM and put breakfast out at 7:45 AM.  We had over 20 people attend and most of them ate breakfast.

Donna, Cindy and I all baked goodies for the bake sale coming up the next day at the Pre-Valentine's day Bazaar.

Debbie came in and helped at the Bazaar all day Saturday and she brought a bag of goodies that she baked, too.

Art, Sue Watson, George and I were at the Senior Center both days.  Shirley & Sue both came Friday evening, to help set up for the Bazaar.

Sarah Christensen & Amber Chavis put on the most amazing bazaar!  If you didn't attend, you missed a fun event!  This was not only fun, but this was also the best, most enjoyable bazaar we've ever had at the Senior Center during our time here.  They set up and put everything back.  They had to take the furniture out of the back room to make space for vendors.

Debbie and I served at least 40 meals Saturday to the vendors and their children.  We had breakfast croissants, polish sausages, turkey sandwiches, tuna Sandwiches, vegetable soup, split pea soup, chips, potato salad, and cole slaw.  We offered free coffee and snacks.  Sandwiches were made to order on their choice of bread.  (French bread, which we sliced, croissants or the rolls we use for the polish sausages.)  People had a wide variety of items to choose from for lunch.  Lunch was $5.00.  We provided this service for the vendors and their families, yet many, many customers ate lunch, too.

Our vendors had a wonderful time!  There was a constant stream of customers that came through the Senior Center from the time we opened until we closed.  Sue Watson and Shirley Roger had booths by the front door.  Shirley sold 4 cookbooks.  Sue talked to several people who are interested in joining our Senior Center.  She also sold several lunch tickets.

All in all, this was a wonderful experience. Amber and Sarah are planning several upcoming events to benefit the Senior Center, including a motorcycle/auto show July 20th in Wilkowski Park.

Thank you, Sarah & Amber for all your hard work organizing the Pre-Valentine's Day Bazaar!  We appreciate your dedication and commitment to our Senior Center!

Posted by Linda Johnson at 11:13 PM No comments: 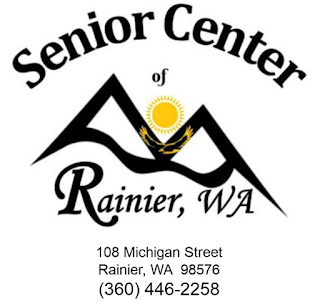 Several things are happening the next couple of weeks at the Senior Center of Rainier...

We're hosting a STEDI breakfast meeting on January 18th at 8:00 AM.  We'll be serving
Sausage, egg and cheese croissants, with extra sausage and eggs on the side, along with spiced sliced apples.

We're hosting a "Pre-Valentine's Day Bazaar" from 10 AM - 3 PM.  Shirley Rodger will have a booth.  She'll also be selling our raffle tickets for our Valentines Day Raffle, as well as homebaked goodies from the Senior Center Ladies!

We're going to the Lucky Eagle Casino along with members of the Yelm and Tenino Senior Centers!  Our members need to be at the Senior Center parking lot no later than 10:15 AM.  We should be home by 3:00 PM.

Posted by Linda Johnson at 6:30 PM No comments: 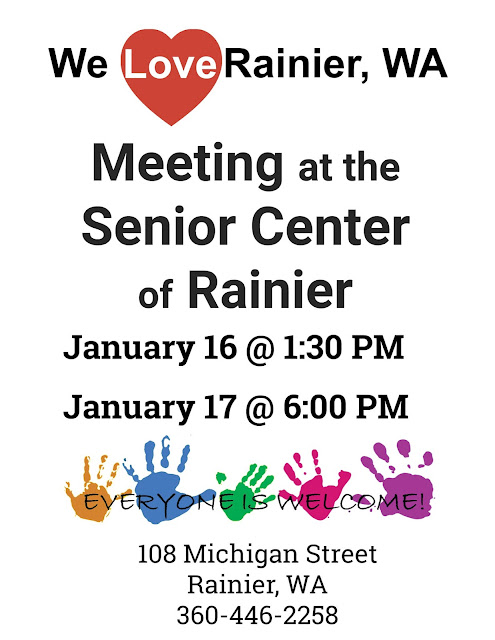 Posted by Linda Johnson at 6:20 PM No comments:

Email ThisBlogThis!Share to TwitterShare to FacebookShare to Pinterest
Labels: Everyone is Welcome, January 2019, Meeting, We Love Rainier WA

Vivian Eason will be at the Rainier Senior Center tomorrow Wednesday the 9th at 11 am. Vivian is from Thurston County Emergency Management. She will be here to speak of preparedness in the event of any disaster. She will have handouts as well as a question and answer period after her presentation.

This meeting is open to all members of our community and is a good way to find out how to prepare properly in the event of any situation out of the norm.

Posted by Linda Johnson at 2:28 PM No comments: